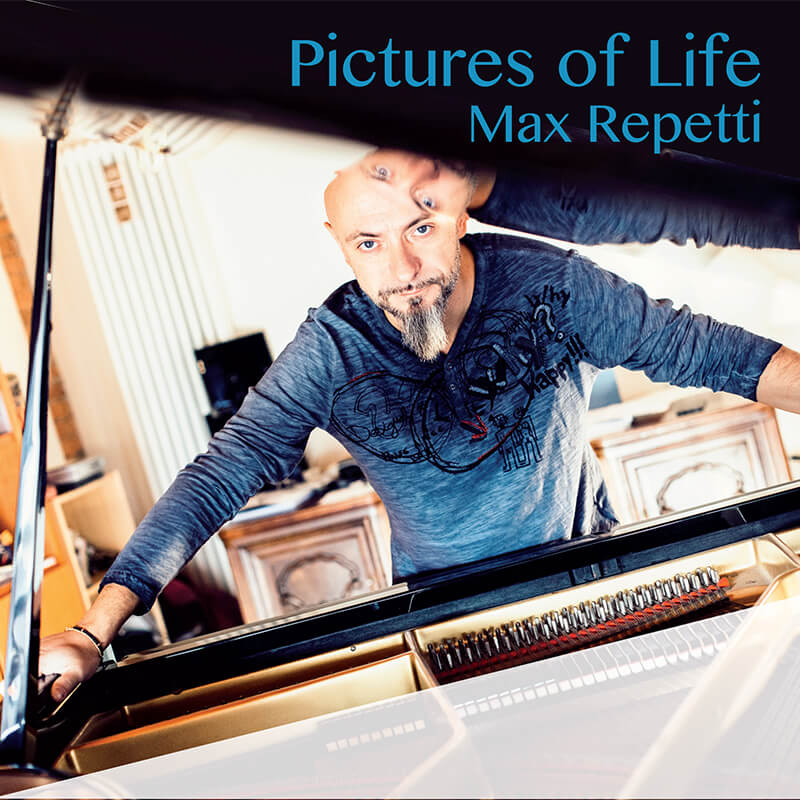 “Picture of life is a fresco of my life.
Each piece of music represents experiences, people, colours, desperation, hope, towns, and silences.
It is an itinerant novel travelling from New York to Paris,from Rio de Janeiro to Rome, and to my native countryside.
Distances that can be filled by the notes that change dissonances into consonances, haunt the silence and freeze a seemingly impossible equilibrium.
This is my life, and this is who I am.”

Massimiliano Repetti was born in Piacenza on 28 June 1970. He graduated at Conservatory Giuseppe Nicolini in Piacenza in 1994 with a degree in piano in the class of M. Midori Kasahara.
In 1966 he moved to Paris where he lived for 4 years and attended the C.I.M. Ecole de Jazz to complete his musical education. Between 2000 and 2004 he lived and worked as a piano teacher in Rouen (Normandy) before returning to Italy when he established some important artistic collaborations as a music teacher and concert performer.
Since 2010 he has worked as a music director and has also been teaching piano and music for ensemble at Artemusica music academy which he founded. In 2011 he completed a Higher Diploma in sound technology at Conservatory Giuseppe Verdi in Milan.Pianist for the Placentia Gospel Choir, keyboardist for the Italian Gospel Choir (the Italian national gospel choir) and Melody Castellari's pianist as well. From 2013 to 2016 he is arranger and pianist for English singer Greg Lake, leader of King Crimson and Emerson, Lake & Palmer. In 2017 he is arranger for the italian singer Eugenio Finardi. Also in 2017 he presented and performed his piano solo album “Pictures of Life” at the Josè Alencar’s Theatre in Fortaleza (Brasil) and at the Staatliche Balletchule Berlin’s Auditorium (Germany). In 2018 he released Greg Lake’s carrer album “Moonchild” with singer Annie Barbazza for Manticore Italy label.